Amidst a verdant tropical landscape, a man sits astride an inflatable pink flamingo as if he were floating on a swimming pool and yet, there’s no water in sight. Mystery, deception and play are at the centre of Morocco-based artist Yassine Balbzioui’s surreal painted scenes. For his latest exhibition, Funny Games at Kristin Hjellegjerde Gallery Berlin, he presents a powerful new body of work that explores a curious liminal space between humour and danger, reality and dream. 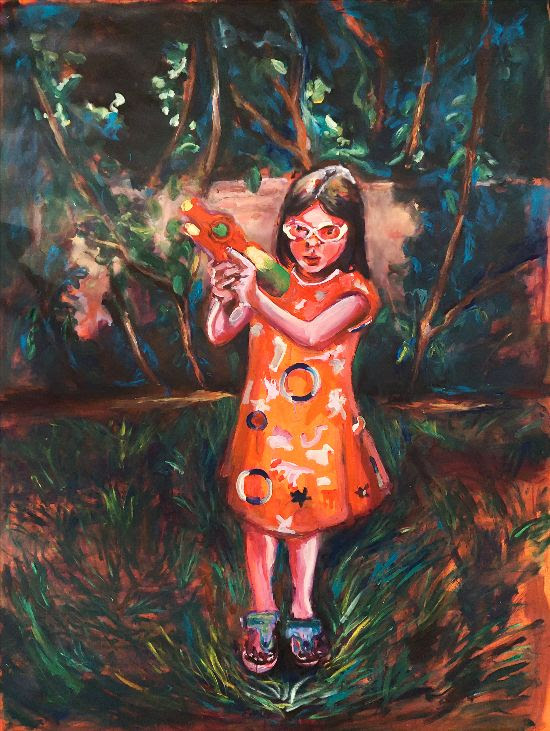 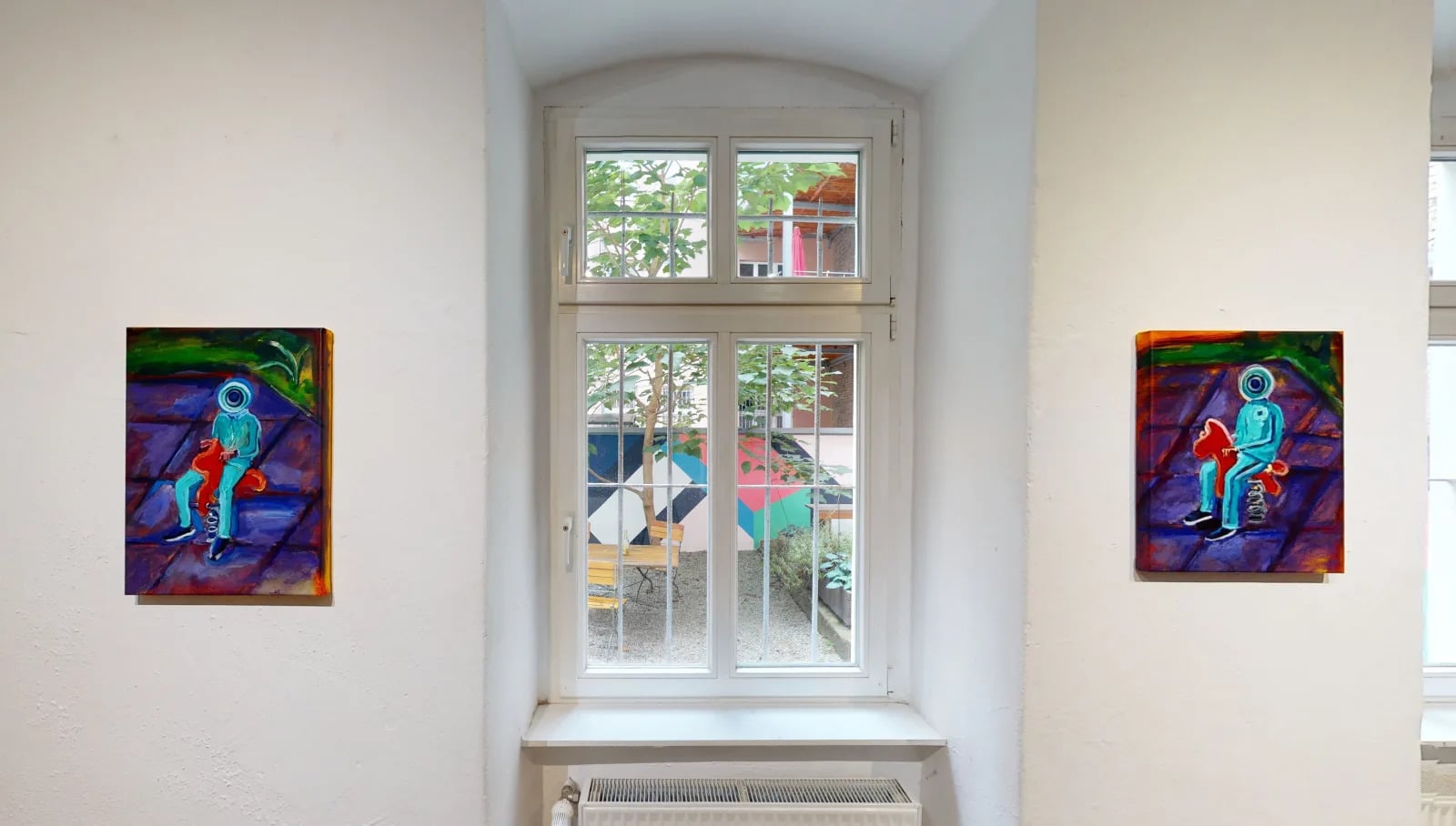 The exhibition borrows its title from Austrian screenwriter and filmmaker Michael Haneke’s 1997 psychological thriller, which similarly to Balbzioui’s paintings, blurs the boundaries between fact and fiction. In the film, two young men hold a family hostage and torture them with sadistic games in their holiday home, frequently breaking down the fourth wall by addressing the camera so that audience becomes witness. Although Balbzioui does not depict horror or violence, he is interested in how the torturers’ restlessness is linked to a certain nostalgia in the sense that their “games” mimic childlike behaviour. In the making of art, the artist seeks to also enter a childlike state that brings with it a greater level of creative freedom, innocence and excitement that’s then filtered through an adult perspective.

Significantly, many of Balbzioui’s subjects are depicted wearing masks, or their heads are replaced by circular shapes which resemble a bullseye or a large, singular eyeball. While the concealment of identity adds another layer of mystery to the works and relates, once again, to notions of performance and play, it is also an act of willful disruption; as an Afro-Arab artist, Balbzioui often finds himself reflecting on the expectations of the European gaze and deliberately avoids exoticism in his work. This is perhaps most obvious in the paintings entitled Red Horse I and Red Horse II which show a figure dressed in a tracksuit and trainers sitting on a playground toy horse. The artist invites us to find humour in an adult aping a child’s game, but there is also a mournfulness to the scene that connects back to nostalgia and the impossibility of reliving the past. 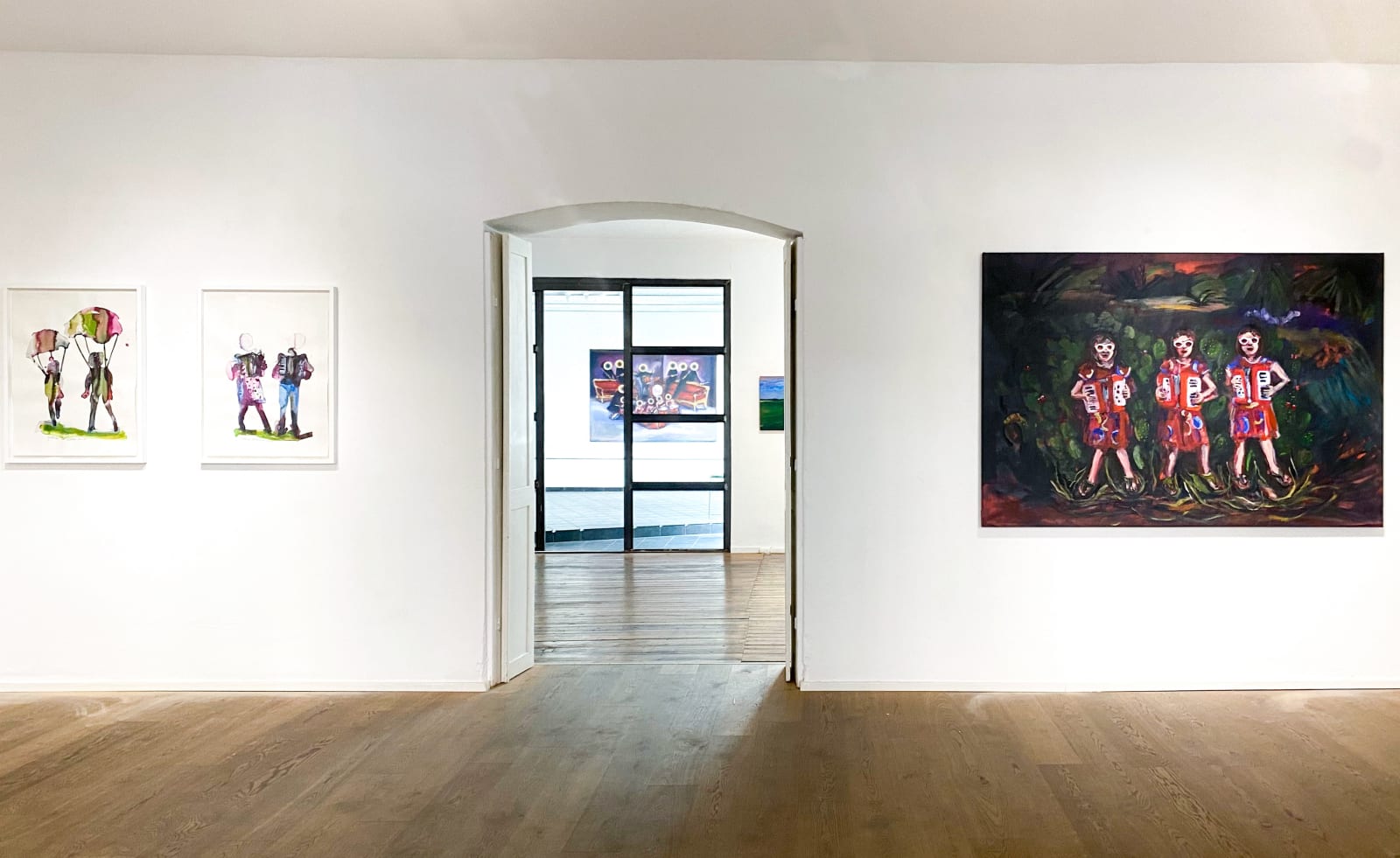 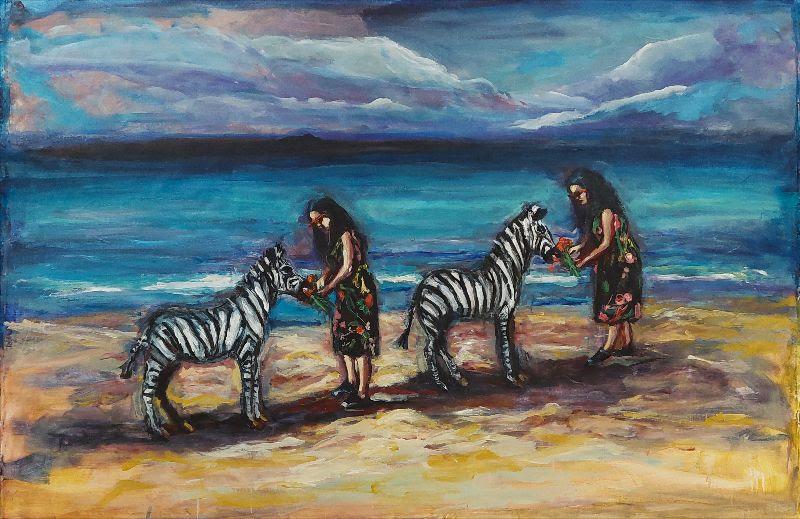 Balbzioui seeks to approach each painting with fresh eyes by playing with different artistic mediums and modes of investigation. To create the Red Horse paintings, for example, the artist built a model as a kind of stage set which he photographed and altered on Photoshop, before finally transferring the scene onto two canvases that show alternative perspectives. Similarly, the repetitive figures in the works entitled Three Accordions and Zebra Flowers were originally composed using Photoshop to evoke the idea of a digital glitch, which is then translated into the medium of painting. This layered process adds a sense of dynamism to the work, which is also felt through the rough, urgent brushstrokes and blurring of colours.

Balbzioui has said before that his paintings “are a resistance against the banality of the world” and in this sense, Funny Games is perhaps best understood and appreciated as a deliberate attempt to destabilise the image in order to access a more liberated creative experience for both artist and viewer. 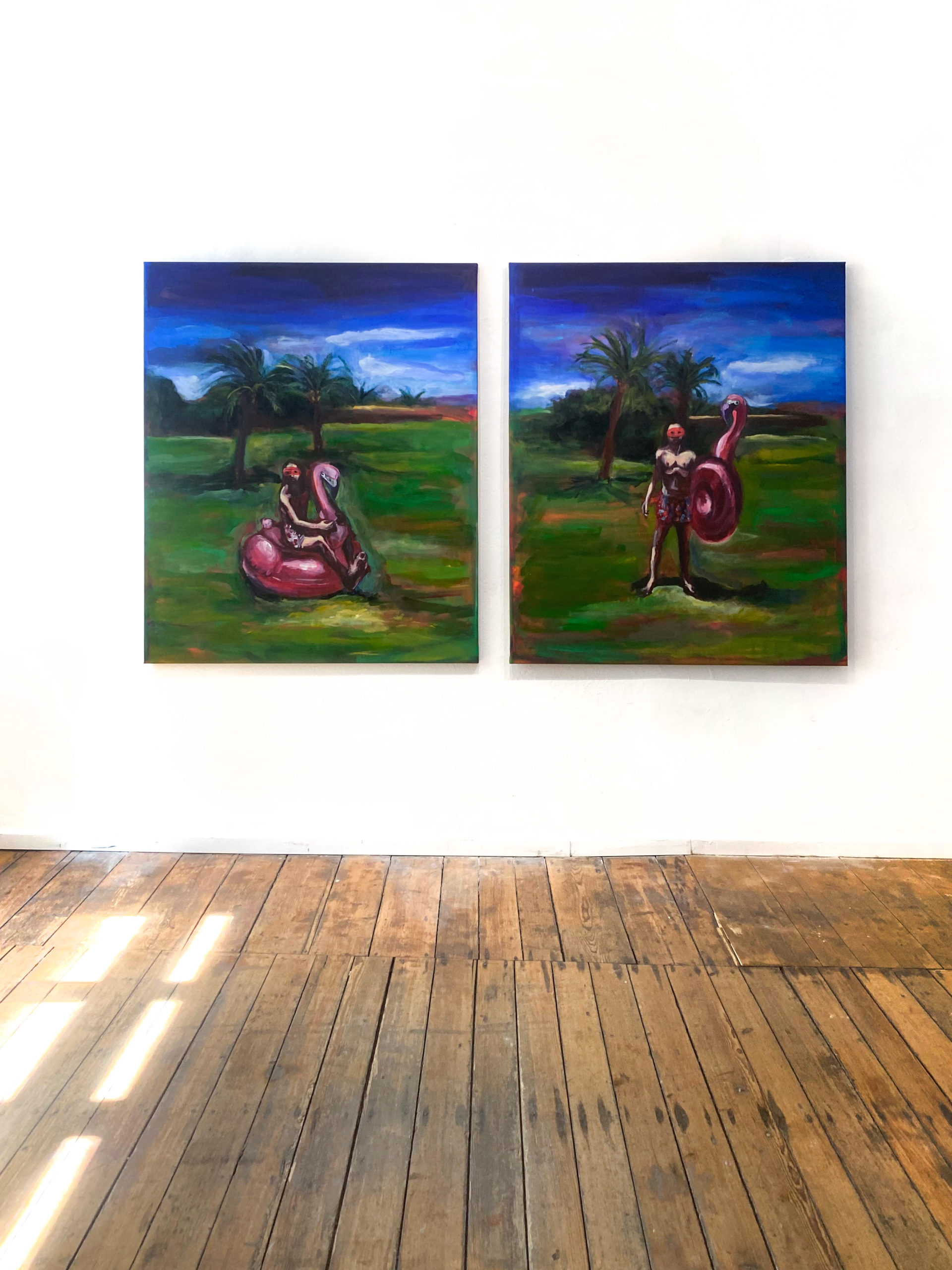 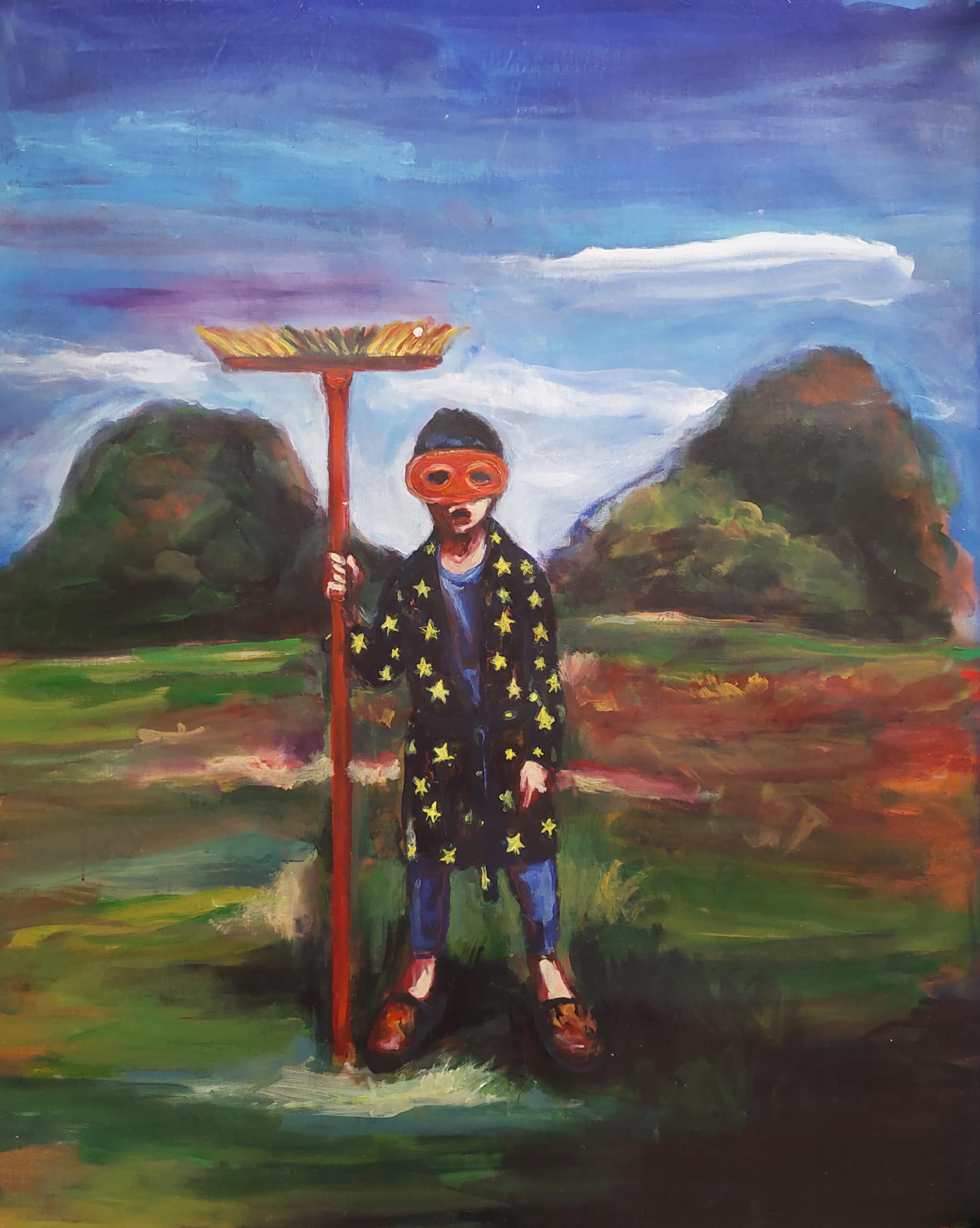