A masked man wearing a suit holds a sunflower over a black hole, whilst a line of men holding spades watch in the distance, their faces obscured by floral balaclavas. We wonder: is this man planting the flower, burying or stealing? Is this a ceremony, a dream, a nightmare? ‘Spy Flower’ is just one of the surreal scenes that Morocco-based artist Yassine Balbzioui presents in his latest exhibition entitled Wild Gardens at the Kristin Hjellegjerde Gallery London.

Mystery is at the centre of Balbzioui’s artistic practise; each painting is layered with narrative possibility, provoking the viewer to continue the creative process with their own imagination. Balbzioui typically works from an archive of collected images, film stills, travel photography and portraits that he takes of subjects wearing costumes and masks.‘The mask is a way of protecting the self, but it is also a tool for performance and play,’ commented the artist. Notably, all of the figures in this latest body of work are either wearing masks that reveal only their eyes, or appear to be hiding behind various objects. The effect is as humorous as it is disconcerting. ‘Bad Disguise’, for example, depicts a figure wearing a tutu skirt and what looks like swimming goggles, an image that is imbued with innocent childhood theatrics, whilst the recurring figures of masked suited men possess darker undertones.

This tension between danger and play is another key theme in the artist’s work, and one that draws parallels with the tradition of fairy tales. This is most evident in Balbzioui’s series of round paintings. The curved canvases, reminiscent of portholes, provide portraits of curious, fantastical characters such as ‘Zebra Man’whose face is made up of a bull’s-eye circular pattern, or the spectral figure of ‘Le Jongleur’ who is depicted juggling three giant pairs of scissors. Both these characters are simultaneously playful and unnerving in their suggestion of literal or potential mutilation. Standing in front of the paintings, you are struck by the sense of spying on something secret and otherworldly.

‘The forest is a silent space where we can do wild things, where we can be animals,’ said Balbzioui, commenting on the exhibition’s title which takes its name from the predominant background scenery in these paintings. At times, the artist’s characters appear deep within a blanket of green, whilst at others, the forest looms behind them. We might recall Grimms’ fairy tales that often involve a journey into the woods, a place of unknown dangers and yet, as Balbzioui comments, forests also provide space for exploration, contemplation and possibility. Analysing the imagery of forests in literature psychologist Carl Jung commented that they’re ‘essentially culturally elaborated representations of the contents of the deepest recesses of the human psyche.’ In this context, we can understand Balbzioui’s lush, green setting and surreal scenes as a visual projection of the artist’s unconscious mind. Indeed, the artist describes his practise as spontaneous, insisting that the final outcome is always a ‘surprise’.

It is this sense of uncovering that is so seductive about the work. The images appear familiar, whilst continually denying the satisfaction of full recognition ‘All of my paintings are a resistance against the banality of the world, against the speed of things,’ commented Balbzioui. Whilst we are bombarded with imagery in our everyday lives, Balbzioui’s work provides an escape, a pause and most importantly, the provocation to be curious. 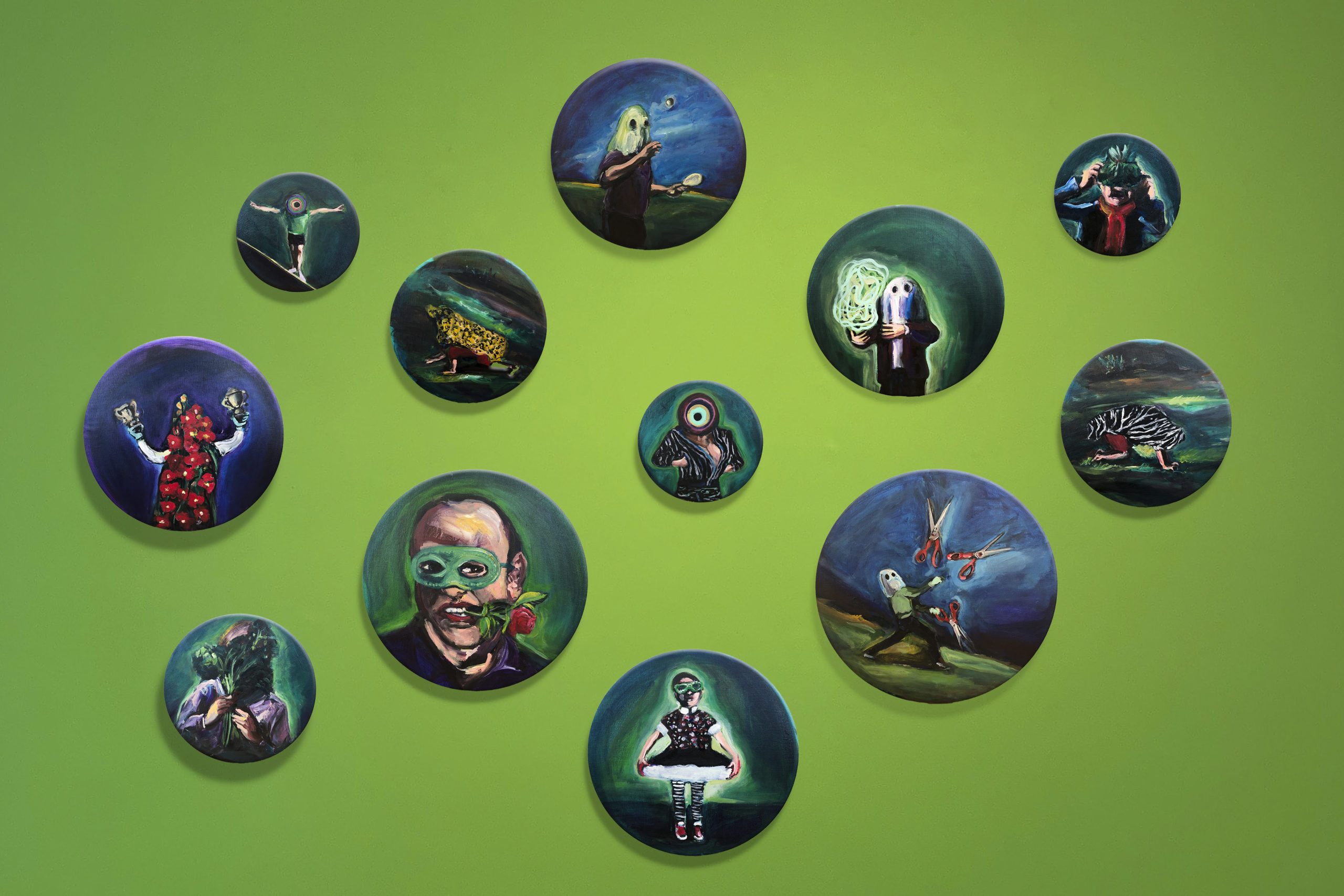 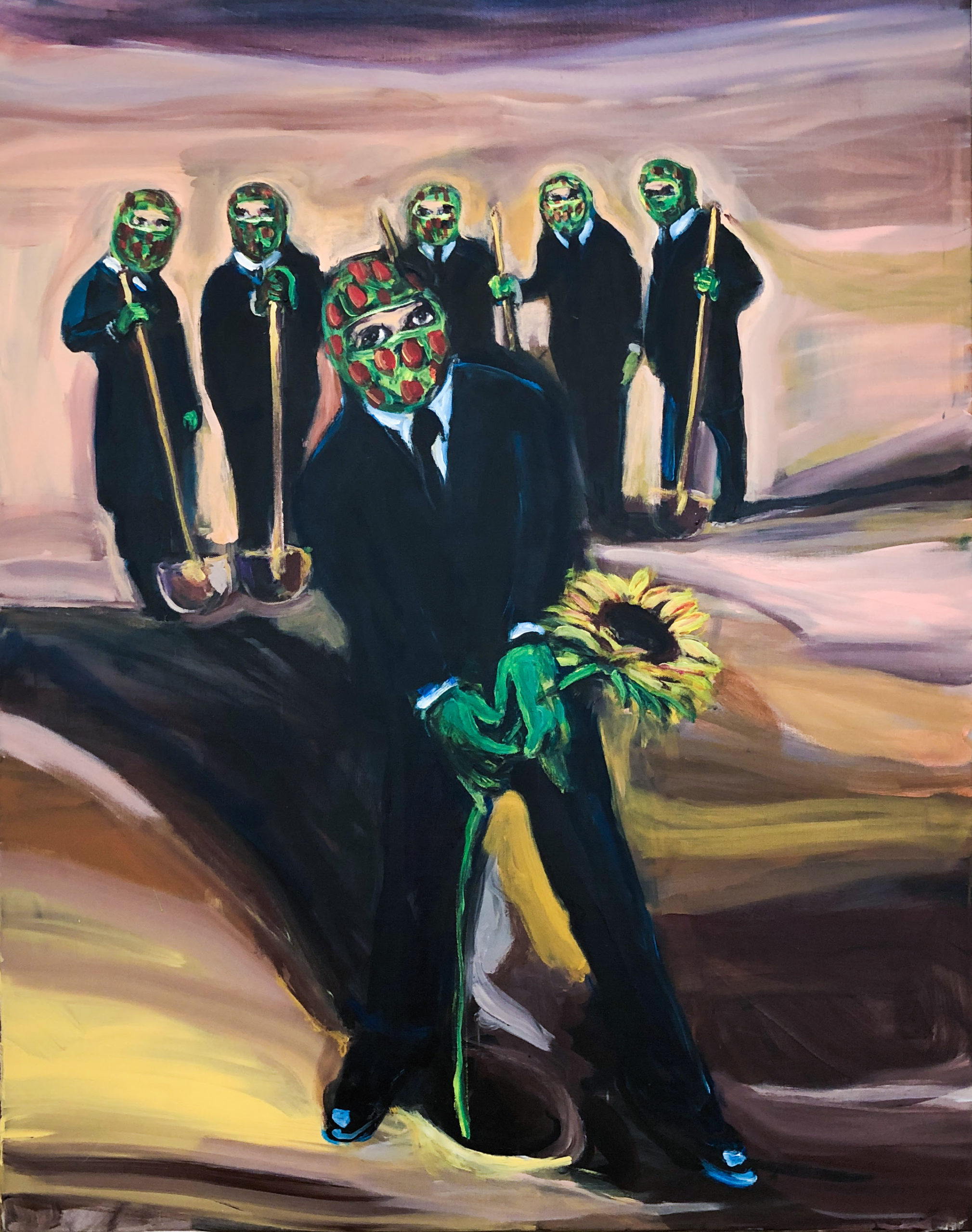