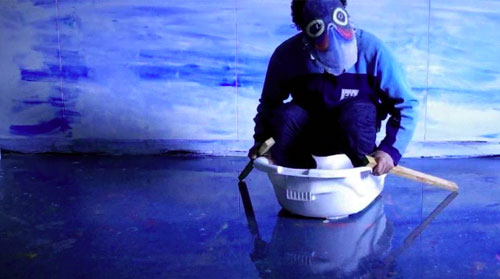 Yassine Balbzioui’s exhibition « The fish inside me », showcases an ensemble of paintings, photographs, watercolours and videos, which give us a complete overview of his practises and of his universe.

Balbzioui essentially describes himself as a painter: he has always painted and drawn, for him it is like breathing. It allows him to glance at the world and question it, a kind of curiosity that is deliberately candid, but also a need to remain firmly linked to the images. Until now, Balbzioui compared his art to cooking, considering photography or video to be the preliminary ingredients of his pictorial concoctions. Today, it seems, that Balbzioui has chosen to use these mediums to give a voice to his concerns, both aesthetic and intellectual.

It all starts with an installation -a sculpture- presented as a strange self-portrait: a body, sprawled out on the ground, the head burrowed under a blanket. We know it is the artist, but we don’t know whether he is alive or dead. Is it a murder? Are we witnessing a thriller? Is this the spectacle of the artist’s death? A different hypothesis, which is explored in Balbzioui’s 2009 series « Down in the hole », is that he is hiding his face in order to make the world disappear. In this series the artist portrayed himself in unusual positions, often hanging upside down, his face buried in sand.

This brutish gesture – that of the ostrich, an animal Balbzioui is very fond of and paints often – this kind of childish attitude is indicative of the questioning and the fear that inspire his work.

And this self-portrait is very telling of Balbzioui’s universe: a strange and somewhat disquieting atmosphere, where we find these hybrid beings, half human, half animal. Nothing is certain. Are they anthropomorphised animals or human beings wearing animal masks?

This dialectic between « showing » and « not showing » is present in all of Balbzioui’s work. In some of his older paintings, his figures hide their faces behind things as silly as lettuce or fish.

Following the example of the opening self-portrait, Balbzioui’s figures all have one thing in common: the absence of a human face – be it concealed by a sheet of plastic or a paper bag, crossed out by a stroke of paint, masked by a piece of cardboard or disguised as an animal.

Like in many classical fables, Balbzioui’s work often refers to a bestiary. According to him, animals – fish, ducks, ravens, and ostriches – have characteristics and attitudes that are not so far removed from human beings. In the « Ostriches » series (2009), he successfully managed to catch the « essence » of the animal, with its ferocious, furious, stupid and somewhat dazed expression, yet at the same time instilling something human within in. In the series « Trou blanc » (a play on words in French*), Balbzioui’s ostriches seem to be plotting something while posing for what looks to be a strange family portrait.

The artist seems to weave an implicit link between this question of dissimulation and family. The mask or the « persona », in other words the character we play, is nothing but a façade we build ourselves. Much like in the theatrical world, the mask or any kind of disguise we put on alludes to our social ego, within the family, and everywhere else. As Jung (1) said, everybody fits, in one-way or another, in this social and familial scenography. And, in the presence of such obvious fakes, a portrait of a hidden face is no less truthful.

Then, from a hole, a different (and comical) perspective, one that could be described as a cinematographic shot, the ostrich is taken by surprise. Apart from the visual play, this reversal opens up a symbolic space which is as significant as it is ambiguous: between an illusive refuge where the world vanishes, the terror of falling into a bottomless place (we are not far from Lewis Carroll here), and, without getting too lost in a Lacanian analysis, the dizziness of the unexplored inner territories: « The fish inside me ».

The hybrid beings that Balbzioui paints, bordering between human and creature, question the animality inside us. By doing so, he reveals this unexplored element, overshadowed by thought and civilisation, along with all the twists and turns still possible.

The series called « The fish inside me » shows swimmers decked out in fish masks, intensifying the aquatic metaphor. In an atmosphere, both enigmatic and nocturnal, they flaunt their dumbfounded faceless faces; their eyes wide open like black holes, possibly observing us from behind their masks. Inquisitive and stupid, in the true sense, these eyes seem to shout: « and so… ? What about the world? », highlighting a kind of fear when confronted by this world, to which we belong.

Apart from the nonsense and the discrepancies, the funny movements (in terms of their break with coherence) also suggest a childlike world. Yet, at the same time, these masked beings, half-Man, half-fish deny any feelings of innocence, sending us back « into » ourselves with a kind of violence. Strangely, they seem to be in their « natural environment » and at the same time exogenous to it. In other words, these fish are not « objective fish. » Instead, they reveal the invisible, awkward and troubled part of humanity, oscillating between strangeness and madness.

Like Gogol’s madman Proprichtchine, does Balbzioui hear animals speaking, or more precisely, does he hear animals inside us, roaring and rumbling their unspoken revolts or their suppressed violence?

Within this carnival like aesthetic, Balbzioui’s paintings, as well as his photos and videos (the adventures of the « big head » come to mind) tend toward the grotesque. Thus, he is in line with a certain literary and artistic tradition. However, his choice to represent what is unconventional, hybrid, heterogeneous, fantastic, strange, burlesque, comical, and above all out of the ordinary, questions more than ever, an unsettling present. Through the uneasiness that comes from representing the grotesque, Balbzioui’s art expresses as much anxiety as it does « radical contradiction ». It rejects norms, it rejects the rules of etiquette and it rejects obviousness.

One can, therefore, define Balbzioui’s painting as « expressionist » or a sort of « expressionism of derision. » On the one hand there is an animated intensity in the strokes of paint, the representation of bodies and the background, in which the chiaroscuro stand more for an atmosphere or sensation than a pictorial truth. On the other hand, there is a sensitive conscience of survival of « the still fertile womb from which the vile beast emerged » (2).

But the hyperbole, built with humour and irony, turns all pessimism into a kind of saving laugh. As Baudelaire said, « the laugh caused by the grotesque carries something deep, axiomatic and primitive within it »(3). Balbzioui has understood the very essence of why disguise is comical: to detach oneself from the « common body », to quote Bergson (4) creates a discrepancy, something unexpected. He doesn’t think twice about photographing himself lying in rubble like a dead fish, or, with a fish mask on, emerging from the Niger River, after having caught one of his lookalikes. Or as in the video, « The fish inside me », rowing in a baby bathtub, for better or worse trying to attain inaccessible shores.

Sacrificing his self-esteem on the altar of derision, Balbzioui is neither afraid of ridicule nor the absurd. His art is a way of fighting against solemnity and seriousness: it is thus, a form of subversion, which opposes the strength of his resistance through this step backwards, this « return to nature », towards theories void of humanity and dangerous idealism.

The laugh, now more than ever grating and « satanic » (3), that Balbzioui’s video performances or photographs provoke, express with great intensity our conflicting nature between these two infinities within us: the angelic and the demonic, the sublime and the beast.

But that laugh, resulting from the artist’s propensity of engaging with the nonsense, constitutes, as Bergson and others before him said, the very essence of human intelligence and creativity, a bridge firmly built between life and art.

Because for Balbzioui the only real equation is « art = life. » He would certainly agree with Filliou that in art, as in life, nothing is serious…even though there is actually nothing more serious. The « idiocy of the artist » that Jouannais (5) writes about is, for Balbzioui, an open struggle, a strategic statement, a constructed and performed attitude. It is based on the lucidity of a man committed to his art, to the evolution of artistic forms and to the life of his contemporaries.

* “Trou blanc” can be translated in “white hole”. In French, it also sounds like “troublant”, meaning “disturbing”. This wordplay deals with the eerie aspect of a hole, a bottomless pit.